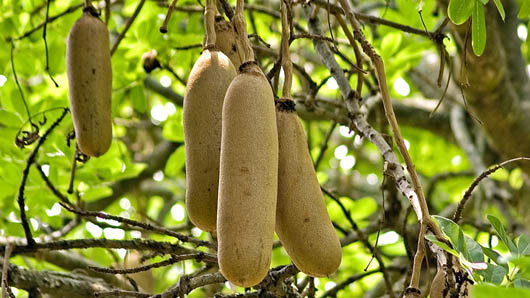 Kigelia Africana or Kigelia pinnata is one of a kind and the only Kigelia plant. It gets its name from the Mozambican name for the tree, Kigeli-keia, and the English name is because of the shape and size of its fruit. These are not your breakfast type of sausage, but more of a German wurst, or Italian Mortadella or salami. In fact the German name Leberwurst (liver sausage) for this tree reflects this. It is a member of the Bignoniaceae family of trumpet-creeper plants as is the jacaranda, another species which is unique.

It is native to Sub-Saharan Africa and particularly likes woodland areas along streams and river banks and savannah. Its flowers have an unpleasant smell which may be why it attracts fruit bats, as they are normally drawn towards white flowers, but the Sausage tree flowers are maroon or dark red. Hawk moths along with the bats help to pollinate the flowers which also attract birds as they are full of nectar. Hungry antelope and deer species eat the fallen flowers, and it is said that baboons and porcupines among other animals feast on the fruit which is toxic for humans. Despite this it is used in traditional medicine, especially the dried seeds and leaves and the pulp when removed from the seeds is said to help give women firm breasts.

The powdered leaves are used for their wound healing and cleansing properties and it is used for STDs, malaria and a whole range of diseases including gynaecological ones. In fact it may be the African equivalent of the Neem tree that grows in the Indian subcontinent.

The fruit hangs down, suspended on twig-like ‘strings’ and it looks rather as though someone has played an elaborate April Fool’s joke, tying German sausages to the branches. However it is a real tree and does have these amazing fruit. They can probably give you concussion if you unwittingly take shelter from the sun under its shade. On average they weigh around 3 kilos but a large one could weigh as much as 9 kilos. They can be 30-60 centimetres long and have a diameter of around10 centimetres. If you try to eat one you will get blisters on your skin and in your mouth and will be violently ill.

The roasted fruit is used to flavour beer and to assist in the fermentation process, and in times of scarcity, apparently the seeds are roasted and eaten.

They have many traditional uses as the fruit has anti-microbial properties so the powdered fruit is used for skin problems such as acne, and for dressing wounds, and in water it is used as disinfectant. On a dressing the powder is applied to eczema and slices of the fruit are used to make breasts firm. Beauty products are now available which utilize extracts from Kigelia Africana, and these have been advertised as halting the aging process of the skin, although this has not been confirmed in clinical trials by those who do not have a vested interest in the beauty industry.

What seems to have been proved is that the extracts have anti-inflammatory properties and so are useful in after-sun lotions, and for soothing irritated skin. It is also believed, according to researchers at the University of Karachi’s Research Institute of Chemistry, that the extracts from the seeds have potent antioxidant effects. Currently research in on-going into the properties of the Sausage Tree, and researchers who have undertaken a review of the research so far (conducted in 2009) concluded “there is an enormous scope for the future research of Kigelia Africana considering the many medicinal properties it carries” and the fact that it is used for so many purposes traditionally. The researchers end with this call to action “more research work should focus on anti-cancer properties” as it seems that the extracts from this tree may inhibit melanoma.

Olatunji and Olubunmi who carries out the review were also concerned about sustainability and doubtless had in mind what tends to happen to plant species when Westerners decide they are useful either as cosmetics, food supplements or in pharmaceuticals. The Himalayan Yew is one species which is under threat because it is valuable to the pharmaceutical industry and Devil’s Claw is similarly endangered.

It is said that the roots yield a yellow dye, while the boiled fruits give a red one.  It is used in Botswana and Zimbabwe to make dugout canoes, and the strong wood is used for shelving and to make fruit boxes.

One of the folk remedies is to wrap a leaf from the Sausage tree around a wart, then bury it so that as the leaf decays so will the wart disappear. This is similar to the belief that you can cut a potato and rub it on a wart then bury the potato. Legend has it that Dr Livingstone saw a Kigelia africana and camped beneath it just before he got to Victoria Falls and carved his name on the trunk. It must not have been the fruit season (December to June) I guess.

The tree is sacred to some tribes’ people in Kenya and if a person is missing, presumed dead, they will bury one of the fruit of the sausage tree in place of the body of the lost person.
To see more photos of this tree go to hear.org and see Kim and Forrest Star’s  site.

Psoriasis [pronounced sore-EYE-ah-sis] is a chronic (lifelong) disease of the immune system that varies from person to person, both in severity and how it responds to treatments.

Psoriasis is not contagious. It is not something you can “catch” or that others can catch from you. Psoriasis lesions are not infectious.

How is psoriasis diagnosed?

No special blood tests or diagnostic tools exist to diagnose psoriasis. A dermatologist (doctor who specializes in skin diseases) or other health care provider usually examines the affected skin and determines if it is psoriasis. Sometimes a piece of skin is examined under the microscope.

Is there a cure for psoriasis?

What treatments are the best for me?

No single psoriasis treatment works for everyone, but something will work for most people. It is hard to predict what will work for a particular individual; however, it is important to be open-minded and willing to work with your doctor to find a treatment that will work for you. Learn more about treatment options for psoriasis.

Is all psoriasis alike?

No. There are various forms of psoriasis with plaque psoriasis being the most common. Other forms are:

Psoriasis can range from mild to moderate to very severe.

Can psoriasis affect all parts of the body?

Psoriasis most commonly appears on the scalp, knees, elbows and torso. But psoriasis can develop anywhere, including the nails, palms, soles, genitals, and very infrequently on the face. Often the lesions appear symmetrically, which means in the same place on the right and left sides of the body.

Can psoriasis occur at any age?

Yes. Psoriasis often appears between the ages of 15 and 35, but it can develop at any age. Approximately 10 percent to 15 percent of those with psoriasis get it before age 10. Some infants have psoriasis, although this is considered rare.

Is psoriasis more prevalent in men or women, or in different ethnic groups?

Psoriasis occurs nearly equally in men and women. It is also present in all racial groups, but in varying rates. Psoriasis prevalence in African Americans is 1.3 percent compared to 2.5 percent of Caucasians.1

Everyone wants to achieve glowing, gorgeous and perfect glowing skin. Often we go about it the wrong way and apply harmful chemical laden synthetic beauty products that end up causing more harm than good.
If you want to make a real and lasting change for your skin, opt for natural alternatives such as these magical herbal agents.
1. Chamomile

Chamomile is one of nature’s miracles. It has an incredible number of benefits, and none more so than for our skin. Alpha-bisabolol – a compound found in chamomile – reportedly reduces the appearance of fine lines and wrinkles by accelerating the healingprocess of the skin while also possessing anti-irritant and anti-inflammatory properties. Applying a cooled cup of chamomile tea as a face wash or applying the tea bags onto your skin are two of the most effective ways to take advantage of chamomile as a natural skin healer.
2. Witch Hazel

Produced from the leaves and bark of the North American Witch Hazel shrub, millions of people swear by witch hazel for its acne relieving properties. Witch hazel is an anti-inflammatory that helps to reduce inflammation of pimples. It also clears away excess sebum without drying out the skin too much. Witch hazel is also an astringent meaning it helps to tighten skin tissue and can reduce the appearance of dark under eye circles.
3. Aloe Vera

Aloe vera is another of the more popular herbs for treating skin. Applied most commonly as a gel, women use aloe vera gel prior to applying make-up to keep skin moisturized while men often apply to skin after shaving to rehydrate and treat small cuts. Like witch hazel, aloe vera is another important natural remedy in the fight against acne. Its anti-inflammatory properties reduce pimple size while its anti-microbial properties kill bacteria. Rich in vitamin C and E – two of the most important vitamins for our skin – aloe vera is another of nature’s miracles for achieving healthy, gorgeous skin.
4. Calendula

Calendula is a garden plant in the daisy family that, like aloe vera and witch hazel, has anti-inflammatory, anti-bacterial and anti-viral properties. It is also a vulnerary agent that helps to heal wounds and soothe damaged skin, such as sunburn, cuts and scrapes. Many have also used calendula oil to treat eczema.
5. Lavender

Lavender may be more famous for its relaxing effects of the mind, but it also helps to soothe skin, too. It is rich in a compound called linalool that assists with skin healing while also preventing tissue degeneration keeping skin firm and preventing wrinkles. To make lavender even more of an anti-aging wonder, it encourages the growth of new skin cells due to its cytophylactic properties. Lavender also helps to heal wounds, scar tissue, acne, eczema and problem skin. Being anti-viral, anti-inflammatory, anti-toxic, anti-bacterial and an anti-septic just serves to show how incredible lavender is for skin.
Our skin is the largest organ we possess so looking after it is of the utmost importance. Avoid harmful chemical laden treatments and instead turn to the wonderful herbs Mother Nature has to offer us.